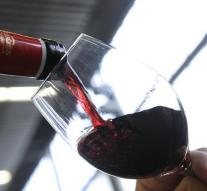 rome - The approximately 840 inhabitants of the Vatican know what to do with wine. annually per person they drink 54 liters of which is two times more than the population of Italy. Translated works every resident of the Vatican consecrated ground each year 77 bottles away.

Der Spiegel writes that the Vatican thus has the highest wine consumption in the world. The German magazine based on a count by The Wine Institute in San Francisco, in the US state of California. For years, the institute publishes research after 'who where much drinking. The research is being conducted worldwide.