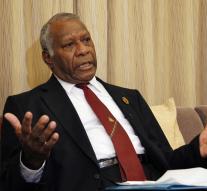 - Police in the archipelago of Vanuatu on Saturday eleven MPs and three lawyers arrested on suspicion of corruption . When the Supreme Court of the country already suffered a case against the politicians.

Parliament President Marcellino Pipite had Sunday announced a pardon for himself and thirteen MPs as suspects identified in the corruption case. He could do that because the president according to the law of Vanuatu has the power of interim president when the president is out of the country.

President Baldwin Lonsdale was traveling abroad. Lonsdale turned back Friday in Vanuatu and pulled in the pardon, reported the Australian news channel ABC. The MEPs were then immediately arrested.

They must await the decision of the court, probably on October 22, in captivity. According to the president Pipite has acted contrary to the Constitution.