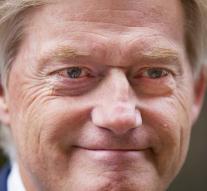 - Secretary of State Martin van Rijn (Health) considers it unacceptable that nursing homes provide more information to attend any of the Health Care Inspectorate (IGZ). It hinders the work of the inspection, he says.

Data include the prescription medications require inspection to assess whether a health institution requires extra attention. Van Rijn writes that Monday in response to questions from include the SP.

Nursing homes want to first clarify the Inspectorate wants to know exactly for which these data are used. The publication of the black list of poorly performing health care organization made this summer a lot of fuss and delivered according to a spokeswoman of interbranch Actiz only for negative news. 'As a result we have become hesitant, it must now be clarified first. '

Van Rijn acknowledges that publishing the list has brought many caused this summer by the people who work in nursing homes. 'But that can not of course mean that absence of transparency of quality. ' '

The Inspectorate said earlier to be amazed at the Actiz step to provide any details anymore. 'Talks on this walk for months, initially Actiz did agree,' responded a spokesman. Requesting information on nursing homes, according to him 'not optional. '