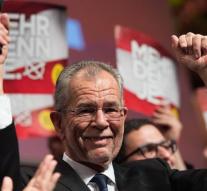 - The left Alexander van der Bellen last Sunday won the elections in Austria with 53.8 percent of the vote. This appears Tuesday in the official results of the vote.

His rival, the right-wing populist Norbert Hofer, received 46.2 percent of the electorate behind him. The Austrian Interior Ministry gave the figures released. Although the presidency is mainly ceremonial significance, the election is seen as a bellwether for the political course who want the Austrians.