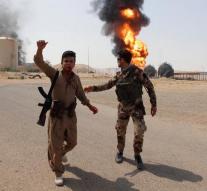 - Islamic State,, almost entirely 'driven out of the northern Syrian city of Manbij. The city is almost entirely in the hands of the Kurdish and Arab troops Manbij besieged for two months, reported the Syrian Observatory for Human Rights.

The SDF, the alliance which the Kurdish YPG militia and Arab rebels together, got in the conquest of Manbij support of US special forces. With the fall of the city seems IS have access to the Turkish border and thus definitively lose an important supply route of recruits and goods.

According to one of the allies of the SDF, the so-called Military Council of Manbij, is still fighting in the center. IS would now have to give up 90 percent of the city.