Home / Tech / Vacuums and security camera in one 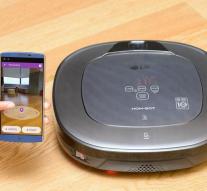 
The Hom-Bot Turbo + has an associated app that allows users on one part of the room to focus, and the robot at that spot vacuuming. Of course, he can also make circles, where he whilst driving keeps an eye on where he is already and not been.
It is also possible to watch it yourself using the app even when you're not home. Indeed, the Hom-Bot Turbo + can also detect motion and create pictures and send them as this happens.
The robot vacuum cleaner has no price or launch date. Following the CES Consumer Electronics Show in Las Vegas in January.
NEW