Home / World / Vaccination saves every year the lives of 36 children 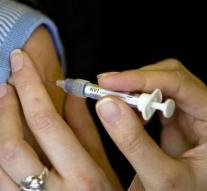 - Every year again 36 children in the Netherlands owed their lives to the vaccines they got stung from their infancy.

This is calculated by RIVM epidemiologists Maarten van Wijhe and Jacco Wallinga following a request from NRC, the newspaper reported Saturday.

Last week, vaccine critics in the news after it became known that the RIVM will allocate two million euros to train vaccinating doctors for discussions with vaccine refusing parents. Wijhe and Wallinga calculated earlier that the children who owe their lives 9000 were born between 1952 and 1992 to vaccinations.

Their study was designed to refute a major drawback of vaccine critics. Who argue that the diseases that vaccines were already were on the verge of disappearing when the vaccines arrived.