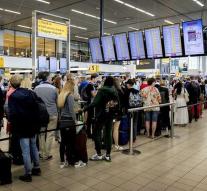 hoofddorp - Dutch Turkey Travelers allow themselves little concern for the troubled situation in the country after the failed coup Friday. They just go to their Turkish destination, says tour operator Thomas Cook / Neckermann.

sit through that organization currently some 6000 Dutch to Turkish destinations.

Wednesday announced the Turkish President Erdogan for three months a state of emergency. That means that he and Prime Minister Yildirim can rule by decree and the state Legislature offside. The press can be reduced even further.


,, From an emergency notice holidaymakers in the resorts usually nothing. You saw it last weekend after the coup too. People there have heard only by calls from the Netherlands, 'said a spokeswoman for Thomas Cook.