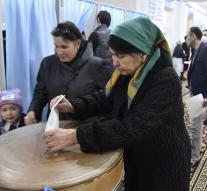 tashkent - The people of Uzbekistan to visit the polls Sunday to elect a president. That's for the first time since the country in 1991 after the breakup of the Soviet Union became independent. All those years the country was ruled President Islam Karimov, who died at the age of 78 in September.

Karimov did not best name abroad. In particular, he would have violated human rights on a large scale. As opponents of the regime were tortured, among other things. Favorite for the succession of authoritarian Karimov is Sjavkat Mirsijajev, the current prime minister.

Uzbekistan has around 30 million inhabitants, of whom 88 percent are Muslim. Residents can go to Sunday evening at 9300 polling stations. The result of the election is not expected until Monday. The Organization for Security and Co-operation in Europe (OSCE) has three hundred observers on the ground.