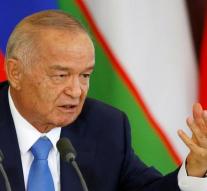 tashkent - Uzbek President Islam Karimov (78) is in critical condition in intensive care after a stroke, as confirmed by the authorities.

,, With a heavy heart we announce that rapidly deteriorates the health of our president and the doctors see it as criticism, '' says the government. normally are not being disclosed about the health of Karimov.

According to some media Karimov was already deceased. Previously published photos showing that the family cemetery was trimmed. Also, the government ordered to clean the streets of his hometown. That would indicate an impending funeral.


Human rights organizations designate the president as a dictator who rules with an iron fist. Karimov, the former Soviet republic introduced since independence in 1991. His death will lead to political instability, according to insiders. In the region are Muslim militants present.