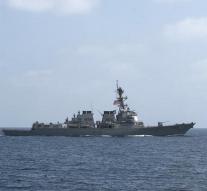 - The American destroyer USS Mason was Wednesday again targeted by rockets for the coast of Yemen. Sunday as two missiles were fired on the ship. This time both missed their target.

The missiles were again fired from an area controlled by Houthi rebels, backed by Iran. That was when the shelling on Sunday also the case. Mason, this time in the Red Sea accompanied by the naval vessel USS Ponce, fired only 'defensive bursts' in the direction from which the missiles were.