Home / World / USA: we have killed dozens of terrorists al-Shabaab 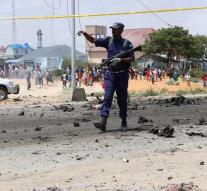 mogadishu - Some sixty fighters from al-Shabaab were killed in an air strike in Somalia. That is what the American forces say, supporting the Somali army in the fight against the terrorist organization.

The bombing took place last week in the neighborhood of Harardhere. It was the deadliest air attack on the group since November 2017. Then a hundred fighters died.

Al-Shabaab regularly commits attacks in the conflict-stricken African country and does not save civilian targets.