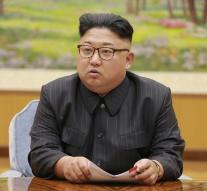 new york - The United Nations United Nations Ambassador Nikki Haley said Monday that it is time for the UN Security Council to impose 'the strongest possible measures' on North Korea after the country's sixth and largest nuclear test.

Because 'enough is enough,' she said at the beginning of a session of the UN Security Council on North Korea.

Haley said that the approach to more sanctions against North Korea has not been working by the fifteen member council since 2006. She described the North Korean leader Kim Jong-un as someone who 'prays for war. '

'Despite our efforts, North Korea's nuclear program is more advanced and more dangerous than ever,' said Haley. 'War is never something the United States wants. We do not want it now. But the patience of our country is not unlimited. '