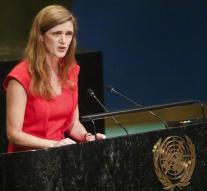 - The United States Monday during a session of the UN Security Council called on by Saudi Arabia-led coalition to stop bombing in Yemen.

According to Ambassador Samantha Power Saudi Arabia has the right to defend itself against rocket fire by Houthi rebels, but must recognize the coalition and the government of Yemen that there is no military solution to the conflict.

'Air strikes which schools, hospitals and other civilian objects must stop taking,' said Power. Often caused the bombing damage to infrastructure which is essential in order to provide humanitarian aid to the population, they added.

Critics point out that the US and for example the United Kingdom ammunition and refueling aircraft available for the Saudi air force.