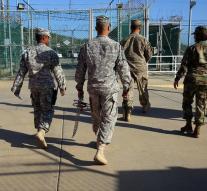 - Fifteen prisoners have been released from the controversial Guantanamo prison. They were transferred to the United Arab Emirates. It is the first time such a large group of prisoners to be released since President Obama came to power. It is about twelve Yemenis and three Afghans. Among them is the Afghan Obaidullah, who was in jail for more than thirteen years after allegations about hiding mines, which could be used against US forces in Afghanistan.

There are still 61 prisoners behind in the military prison in the territory of Cuba, according to US media. Gitmo, as nicknamed, was set up in January 2002. Most of the prisoners suspected of terrorism, but have never been accused of something, never had a trial and stuck for years.

In February, Obama sent a plan to Congress for closing the prison before the end of his term in 2017. Gitmo is a legacy of his predecessor Bush. Obama wants to collect the prisoners on their own US territory. However, Congress dominated by Republicans want to put any suspicious foot on American soil.