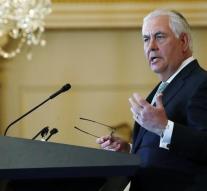 washington - The United States is willing to talk to Russia about stabilizing the situation in Syria, including setting up no-fly zones. That's what the Foreign Minister, Rex Tillerson, said on Wednesday.

'If our two countries work together to create stability on the ground, then that will lay the foundation for reaching an agreement on the political future of Syria,' said Tillerson in advance at the G20 summit in Germany this week. The minister also emphasized that Russia is responsible for preventing Syrian President Bashar al-Assad from engaging in chemical weapons against his people.

The US wants to discuss with Russia about the deployment of observers for possible ceasefire and the delivery of humanitarian aid to the Syrian population.