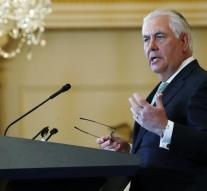 washington - The rocket that fired the North Koreans in the night of Monday on Tuesday was a long-distance hit (ICBM). Meanwhile, both Rex Tillerson, the US Secretary of State and the army admitted after studying the data.

It is a milestone in the North Korean arms program. No sooner did the country launch an ICBM. Earlier this day, the US government still claimed that North Korea had fired a regular medium-distance racket.

According to North Korea, the rocket reached an altitude of 2,800 kilometers, reaching nearly 1,000 kilometers of launch space in the Japanese Sea in 39 minutes. This long-distance racket can be shot at targets throughout the world, according to Pyongyang. Only five countries in the world have ICBM systems at their disposal.