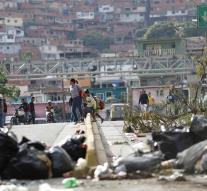 washington - The US government has sanctioned Wednesday against thirteen senior Venezuelan officials from government circles, the army and the state oil company PDVSA.

The measure is intended to push pressure on President Nicolás Maduro. Washington wants to set aside the contested plan to form a 'constitutional assembly'. The opposition sees this as a way to outlaw parliament and establish a dictatorship.

The US decided to focus on persons who would have been guilty of violation of human rights and corruption. Stricter financial or other sanctions against the major oil industry continue to save Venezuela for the moment. These are still possible.