Home / World / US wants to supply weapons to Taiwan 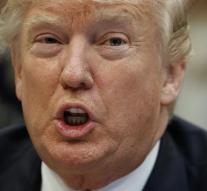 washington - The US wants to supply weapons for Taiwan with over 1.2 billion euros. The government of President Donald Trump informed Congress that Thursday, so the White House knew.

It is a sale consisting of seven parts. According to the White House, sales show 'support for Taiwan's ability' to maintain good defense.

The spokesman immediately acknowledged that there are no changes in the so-called one-Chinese policy.