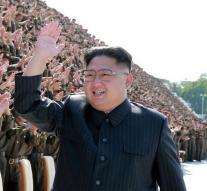 washington - The US wants an oil boycott for North Korea. It is one of the proposals in the resolution with new sanctions that Washington will submit to the UN Security Council.

In addition to the oil boycott, the US wants a ban on textile exports and a ban on hiring North Korean staff outside that country. Furthermore, the financial interests of North Korean leader Kim Jong-un must be frozen and he may no longer travel.

US ambassador to UN Nikki Haley wants the fifteen members of the Security Council to vote on the resolution on Monday.