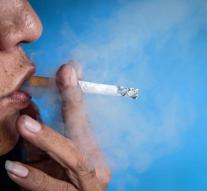 silver spring - The US government wants to reduce the nicotine content in cigarettes so that they are no longer addictive. The aim is to reduce the number of diseases and deaths by smoking.

The American Food and Drug Administration (FDA) announced this Friday. The government, which oversees quality and safety of food and medicine, wants to initially 'enter into a dialogue with the public' about the plans.

According to the FDA, 'tobacco is the only legal product that is deadly for half the consumption of long-term consumption. 'FDA topman Scott Gottlieb said that' if we do not change course now, 5.6 million young people will soon die in tobacco use. '

Cigarette manufacturers such as British American Tobacco and Imperial went out of stock on Friday after the FDA announced the plans.