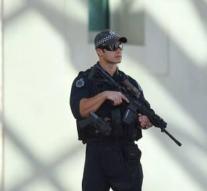 edmonton - The Somali who is suspected of striking a policeman in the Canadian city of Edmonton and pedestrians was previously stuck in the United States. The US authorities wanted to expel the Somali, but he managed to flee Canada to neighboring countries and apply for asylum.

Suspected Abdulahi Hasan Sharif (30) would have hit an agent with his car on Saturday. Then he attacked the policeman with a knife. When Sharif later tried to flee in a truck, he claimed four pedestrians, according to the police.

The US Immigration Service, ICE, announced on Tuesday that Sharif stuck in the US for about four months in 2011. The authorities wanted to send him back to Somalia. The man disappeared, however, without traceability after being released under conditions. The service reported that attempts to detect him were "not successful". Canadian minister Ralph Goodale (Public Security) said earlier that Sharif applied for asylum in 2012 at a border crossing.