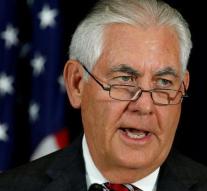 washington - The United States called on the countries involved in the diplomatic conflict around Qatar to seek a solution together. Minister Rex Tillerson (Foreign Affairs) said Sunday that it would be 'productive' if the argued parties sat down.

The surrounding countries have recently broken the economic and diplomatic ties with Qatar. Saudi Arabia, the United Arab Emirates, Egypt and Bahrain accuse the oil state of inter alia tied up with terrorist groups.

The neighbors want, among other things, that the government in Doha maintains less close diplomatic relations with archival rival Iran and Al-Jazeera news channel. Qatar initially responded negatively to the requirements, which makes the conflict appear to be firm.

The battle between the countries is a thorn in the eye. Washington is an ally of Saudi Arabia, but also has a great base in Qatar. Tillerson said that less vigorous rhetoric would also contribute to lowering the tension.

'We think our allies and partners are stronger if they work together to achieve a goal that we all agree on: stopping terrorism and countering extremism. ''