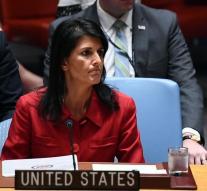 new york - The United States threatened to face military action in the United Nations Security Council on Wednesday in response to the country's missile test earlier this week.

'One of our capabilities lies in our proper military forces. We'll use that if we need it, but we prefer not to go that way, 'said US UN Ambassador Nikki Haley. America is launching new sanctions against North Korea, she announced. She also threatened that the US may trade with countries dealing with North Korea.

The Security Council convened on Wednesday in the run-up to the missile test last Tuesday.