Home / World / US: taking steps together with Russia on Syria 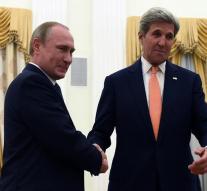 moscow - There can only be an end to the war in Syria if concrete steps are put in the short term. Only then wages diplomatic efforts. That US Secretary of State, John Kerry, said in an interview with Russian President Putin.

Kerry and Putin discussed on Thursday (local time) the need to put constant pressure on supporters of Islamic State and warriors allied to al-Qaeda-Nusra Front.

Kerry arrived Thursday night in Moscow the US plan to work with Russia to start a military pact against two militant organizations.