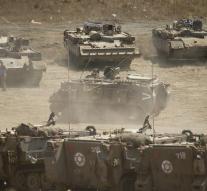 - "The United States and Israel have concluded an agreement on the delivery of \"military aid\" by the Americans for ten years. With the help is costing the equivalent of at least 34 billion euros."

"Sources involved in the conclusion of the contract, declared Tuesday that the deal with signatures ratified within days. The precise content of the agreement was not disclosed. For example, it may involve weapons and weapons, other equipment and advisers."