Home / World / US: Strike violence against observers in Ukraine 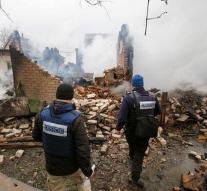 washington - The United States is making great concerns about the violence in Eastern Ukraine against OSCE observers. They are threatened and even shot by separatists, a spokeswoman from the US Department of Foreign Affairs said Thursday.

According to the spokeswoman, such incidents are meant to 'prevent the international community from seeing what is happening in Eastern Ukraine. 'She called on Moscow to use the Russian influence to' put an end to this intimidation campaign '.

The Organization for Security and Cooperation in Europe oversees Ukraine's compliance with the ceasefire. The fact that this mission is not without risk was shown in April. Then an American hospik came to life that accompanied the observers. That happened when his vehicle drove on a mine in a separatist area.