Home / World / US steps from Unesco 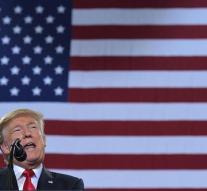 washington - The United States withdraws from UNESCO, the United Nations cultural organization. The US Department of Foreign Affairs stated Thursday that membership should be terminated on December 31st.

The UNESCO has already officially announced its termination, the organization reported.

The relationship between Unesco and the US has been difficult for a long time. Washington stopped paying the contribution in 2011 after Unesco decided to give the Palestinians the full membership of the organization. The UN organization was therefore in trouble because the US accounted for 22 percent of the budget.