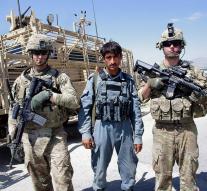 kabul - In a suicide attack near the US military base Bagram in Afghanistan are certainly slain five American soldiers. The bomber was on his motorcycle on an Afghan-American patrol into it and let it explode an explosive. Three other soldiers were wounded, according to official Afghan sources.

The radical Islamic Taliban left a message that they had slain nineteen Americans. A spokesman for the NATO mission confirmed that the victims had fallen. But he could give no information about their nationality.

The US military base Bagram lies in Parvan province near Kabul.