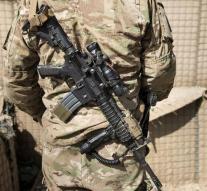 The Americans were part of a NATO training mission assisting the Afghans in their fight against the Taliban. She herself would not officially have fought it. The two were killed when they were under fire in Kunduz province in the north of the country.

The commander of US and NATO forces in Afghanistan, Gen. John W. Nicholson, said in a statement ' despite this tragic event to continue our promise to help our Afghan partners in the defense of their country. '