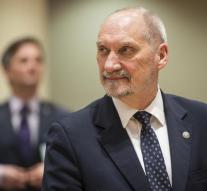 warschau - The US government has agreed to sell patriot air missiles to Poland. According to the Polish Minister of Defense Antoni Macierewicz, a principle agreement was signed in Washington on Wednesday night, on the eve of the visit by President Donald Trump to NATO ally.

The Patriot missiles are delivered to Poland, 'in the most modern configuration,' said the minister.

Poland announced March to buy eight Patriot batteries for a total of 6.7 billion euros. The purchase is part of a thorough modernization of the Polish Armed Forces.