Home / World / US put as a big enemy away 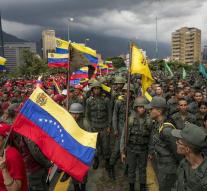 caracas - Venezuela held large-scale military exercises on Saturday and residents were called on the state television to sign up as a reservist. The military show was primarily intended to unite the divided country by eliminating, among other things, the United States as the great enemy.

Venezuelans between the ages of 18 and 60 were called to 'contribute' to the defense of the country 'against the aggressive threats' of the US.

On television were shown images of people who made themselves a reservist. But there is no evidence that people have enrolled massively.

The propaganda follows US sanctions against President Nicolás Maduro's regime. It is also a response to a previous statement by US President Donald Trump. He had shown that military intervention is one of the possibilities. According to the US, Maduro is trying to establish a dictatorship.