Home / World / US pushes UN under pressure across North Korea 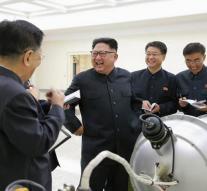 washington - Washington takes sanctions against North Korean trade partners if the United Nations does not announce any additional sanctions against the government in Pyongyang. Minister of Finance Steve Mnuchin said that a presidential decree was ready for signing by President Donald Trump.

The United States wants the United Nations North Korea to punish the nuclear tests that the country has carried out. The Americans advocate, among other things, an oil boycott and a ban on hiring North Korean staff outside that country. Furthermore, the financial interests of North Korean leader Kim Jong-un should be frozen.

US ambassador to UN Nikki Haley wants the fifteen UN Security Council members to vote on a resolution on punishment on Monday.