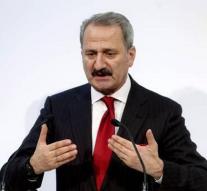 new york - US prosecutors have been charged with a former Turkish Minister for Economic Affairs. Zafer Çağlayan would have been involved in circumventing US sanctions against Iran.

Justice suspects Çağlayan and other suspects of a 'conspiracy to use the US financial system to carry out transactions for hundreds of millions of dollars on behalf of the Iranian government and other Iranian entities. '

Several suspects in the case had high positions with the Turkish state bank Halkbank. They would have carried out the illegal transactions, while the then minister overcame them. Halkbank always claims to have held national and international rules.