Home / World / US: No ransom paid to Iran 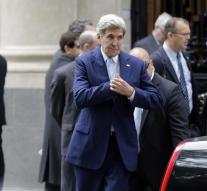 - The United States has acknowledged that a payment of $ 400 million to Iran withheld were released five American prisoners. It is not about ransom, stressed the US State Department.

The five Americans were by Iran earlier this year put on the plane. Shortly thereafter, the country received the million figure, which came from a fund that Iran used the 1979 revolution to buy military equipment. The US refused for a long time to return the money.

Critics in the US suggests that the money served as ransom, but according to the Ministry's nonsense. There would be negotiated separately on the release of the millions and the release of US detainees.


The Ministry have acknowledged that the money is held until the Americans had left Iran. According to a spokesman for the scheduled payment was used as a means to pressure Iran. That must prevent Tehran would return to the commitment to let the prisoners go.