Home / World / US: no evidence of invasion Ukrainian Crimea 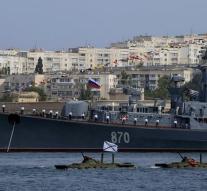 - The United States has not seen anything that proves that Ukraine has tried to invade the Crimea, as Russia says. That the US ambassador to Ukraine, Geoffrey Pyatt, Thursday reported on Twitter.

,, Russia has accused Ukraine have often falsely to divert attention from his own illegal actions, 'said Pyatt. As far as the United States is and will remain the Crimea part of Ukraine, he said.,, We condemn the Russian occupation Crimea and call to terminate immediately. Until Russia returns the peninsula to Ukraine remain the sanctions against Moscow in force. '

According to Russia, Ukraine last weekend attempted to invade the Crimea with elite troops. Which would be blocked by the Russian secret service FSB. A Russian soldier and an FSB employee would thereby have died. Ukraine goes against the story.