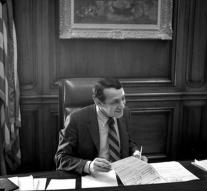 - The US Navy named after a ship to the well-known gay activist Harvey Milk. It is a new oil tanker. The gay community called the decision 'memorable' and 'a clear message'.

Until five years ago, homosexuals were not allowed into the army. Homosexuality was hushed. Do not Ask, Do not Tell, which was called politics. Only a month ago was decided that henceforth transgender may attract an army uniform.

Harvey Milk fought in Korea as a naval officer. He later went into politics and was from 1970 openly of his sexual orientation. In November 1978 he was killed in his office in San Francisco. Moreover, the crime had nothing to do with his sexuality. Nevertheless, he turned into a icon and martyr of the great gay scene in San Francisco.