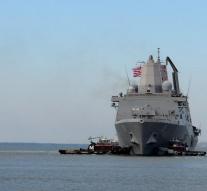 - A US Navy ship was Sunday the target of a failed missile attack from Yemen. Two projectiles were according to an army spokesman fired from Houthi field, but came early into the water.

The ship, the USS Mason, was in the Red Sea off the coast of Yemen when the attack occurred. The vessel was not damaged. The occupants were unharmed. It is still unclear whether the Houthi rebels are actually responsible for the attack.