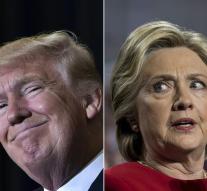 - Donald Trump has won the US presidential election. He was the first to bring home the necessary 270 electoral votes. That report news agencies Bloomberg, AP and CNN. Hillary Clinton has not yet acknowledged her loss.

Financial markets react strongly to the news. For example, the Dow futures, which gives an impression of how the Dow Jones index will open later today, so many points that the market has been shut down temporarily. Moreover, the dollar has returned great value relative to other currencies, except the peso. Mexican currency made a free fall.

Besides of course the Democrats, the pollsters seem to be the big losers of these elections. They were completely wrong, because according to the latest polls published the day before yesterday, Clinton would grab profits.