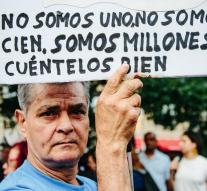 washington - The United States has made 15,000 extra visas available to people who want to work temporarily in the country this summer. The number of permits must attract jobseekers to America in order to cope with the scarcely shortage of workers, according to the Ministry of Internal Security.

According to the Ministry, there are too few Americans who want to work temporarily in the 'non-agricultural sector'. In addition, Americans have insufficient qualities to carry out the work. However, it is unclear what kind of jobs it is.