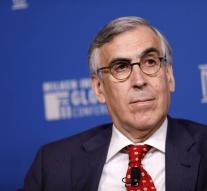 geneva - The United States sees China's influence as a key to the nuclear issue with North Korea. That said US disarmament Ambassador Robert Wood on Tuesday, two days after a new rocket test by the communist regime in Pyongyang.

'I do not go into the various political options that we may or may not think about. But I would like to say that we are currently in the process of looking at measures- politics, economic, security- against these provocations by the DPRK and the most dangerous actions ', said Wood on the Democratic People's Republic of leader Kim Jong-un.

'We are going to increase China's involvement in this case. China is really the key to dealing with North Korea. 90 percent of the trade is with China, it may be clear that China can do a lot more. We want China to use that power. '