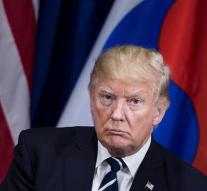 new york - President Trump has signed a decree allowing the United States to increase sanctions against companies from North Korea. Enlargement of sanctions is a means of abandoning the Pyongyang regime of further expansion of its nuclear missile program.

According to Trump, the decree allows North Korea to have less financial resources available to develop 'the deadliest weapons of humanity.' The new measure must restrict the sale of Korean products. Less output means less revenue.

The US president said this just before he was working for a working lunch with the South Korean president, Moon Jae-In and Japanese Prime Minister Abe.