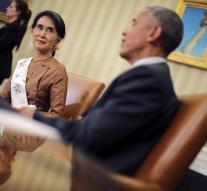 - "The United States no longer impose duties on thousands of products from Myanmar. The US government wants to Myanmar as reward for the past few years to encourage democratization and to pursue that course."

"The administration of President Barack Obama put Burma on a list of developing countries that can sell their products duty-free into the US. As long as the junta in Myanmar was in power, the country previously did not qualify and were furthermore sanctions in force. Since Aung San Suu Kyi, the figurehead of the struggle for democracy in Myanmar, a place in government is devoted to the country much goodwill charge. Aung San Suu Kyi spent Wednesday visiting Obama."