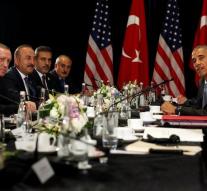 hangzhou - US President Barack Obama Sunday during the G20 summit in China in front of his Turkish counterpart Recep Tayyip Erdogan confirmed that the US assist his country in the prosecution of coup plotters.

Soldiers did 15 and 16 July attempting to seize power in Turkey. The coup attempt failed and, according to Erdogan is a rival of his, Fethullah Gulen, behind the coup attempt. Outside Turkey, this accusation is not taken very seriously.

The 75-year-old Muslim scholar Gülen lives since 1999 in the US state of Pennsylvania. Gülen was previously an associate of Erdogan in the fight against the secular elite in the country revolved around the military.


In recent years, Gulen and Erdogan embroiled in a bitter struggle over the direction of the country and the authoritarian style of government of Erdogan, who has been in power for thirteen years.