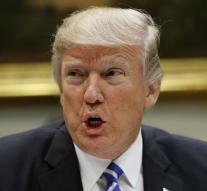 washington - The US state of Maryland and the District of Columbia (D.C.), where Washington's capital falls, drag President Donald Trump to court. According to The Washington Post, they accuse 'unprecedented violations of the constitution' because he has earned millions of dollars to foreign governments since his arrival.

The case is about the fact that Trump still owns his business empire while promising to take away the company. His son Eric earlier acknowledged that the president was regularly informed about the financial health of his company.

D. C. and neighboring Maryland find among other things that companies in their territory face unfair competition from the Trump hotel near the White House. Several foreign officials have organized events or booked rooms over the past few years. President Trump has been awaiting it several times and welcomes guests.