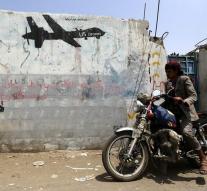 - Eight to al-Qaeda affiliated fighters in Yemen this month killed in US attacks. That the US military said Friday.

Two fighters arrived October 6 killed in an attack. Six other fighters of al Qaeda in the Arabian Peninsula (AQAP) were slain on October 18th. The Americans did not enter into detail about the attacks.

It is not the first time that fighters of the terrorist group in Yemen are bombarded by the Americans, who used previously include drones in such attacks. The United States considered the AQAP group as one of the most dangerous of the al Qaeda network.