Home / World / US fear of violence in Burundi 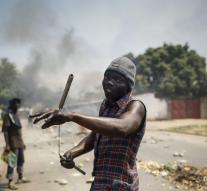 - The United States feared that Burundi in the coming days is experiencing an explosion of violence. According to the US ambassador to the United Nations, which could be the result of an ultimatum set by the president of the country. Who gave the Burundians five days to hand in their weapons chance, otherwise they are considered enemies of the state.

" The United States is alarmed by the increasing violence in Burundi and dangerous, irresponsible rhetoric of the government, militias loyal, violent anti-government movements and criminal elements ", said Ambassador Samantha Power.