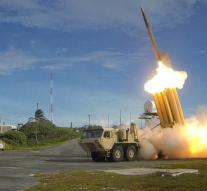 - The United States wants in view of projected missile tests by North Korea as soon as possible to put a THAAD anti-missile system in South Korea. That said, the US Assistant Secretary of State for East Asia Daniel Russel Tuesday.

Russell also said at a hearing of the Congress that the US and the European Union and other international partners to discuss measures to exclude North Korea from the international bank traffic.

North Korea has this year held two nuclear test and several missile tests. The regime in Pyongyang warned in July that could follow a ' physical response '' to the deployment of the THAAD system. China also has said that installing a missile shield ' does not contribute to peace and stability on the Korean Peninsula. '