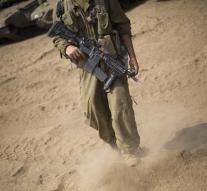 - US military forces were responsible for the raid on the al-Qaeda leader Abu al-Farai al-Masri, near the Syrian Idlib. This leader, also known as Ahmad Salama Mabruk, had close ties with Osama bin Laden in the past.

The Egyptian was sitting in a car near Jisr al-Shuqour, in northwestern Syria, was fired from an unmanned aircraft. According to two sources jihadist died al-Masri in the drone attack, the Pentagon would not confirm that, and shows that, even viewed the result of the attack. '