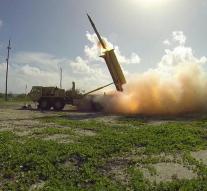 washington - The United States does not see anything in a proposal from Russia and China to reduce tensions on the Korean peninsula. Moscow and Beijing made a compromise proposal after the North Korea missile test on Tuesday, meeting Pyongyang and Washington.

According to the countries, North Korea should freeze nuclear and rocket programs, and the US and South Korea must stop their large-scale military exercises. The Russians and Chinese also find that the US must stop the THAAD anti-missile system station in South Korea.

A spokeswoman from the US Department of Foreign Affairs stated Thursday that Washington felt nothing for the plan. She said that the Pyongyang weapons programs are not comparable to the army exercises with allied South Korea alike. The US government believes that China can do more to boost pressure on the North Koreans.